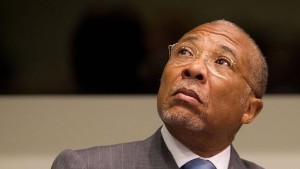 Charles Taylor, the former president of Liberia, has been sentenced to 50 years in prison for war crimes and crimes against humanity committed during the bloody civil war in Sierra Leone.
The sentence was pronounced this Wednesday by judges at the Special Court for Sierra Leone which found him responsible for “some of the most heinous and brutal crimes recorded in human history.”
Presiding Judge Richard Lussick told Taylor his crimes were of the “utmost gravity in terms of scale and brutality.” “The lives of many more innocent civilians in Sierra Leone were lost or destroyed as a direct result of his actions,” Lussick was quoted by the media as saying.
Prosecutors had pleaded for an 80-year sentence, while the defense urged judges to hand down a sentence that would offer the 64-year-old warlord some hope of release before he dies.
Charles Taylor, the first former head of state convicted by an international war crimes court since World War II, was judged by the special court since June 2007 for his involvement in Sierra Leone’s bloody 11 year civil war.
The court found him guilty of 11 counts, including, besides war crimes and crimes against humanity, other serious violations of international humanitarian law, such as pillage, murder, rape and the use of child soldiers in an armed conflict.
Charles Taylor, a rebel in the early 90s, was president of Liberia from 1997 to 2003. He stepped down and fled to Nigeria after being indicted by the court in 2003. He was finally arrested in 2006 while he was trying to escape to Cameroon.
He was charged with having ignited and nurtured the civil war in Sierra Leone to control the country’s diamond resources. The war that lasted from 1991 to 2001 cost more than 100,000 lives.
Charles Taylor will serve his sentence in a British jail. He will, however, remain for the time being imprisoned in The Hague awaiting the outcome of the appeal his lawyers are expected to file.