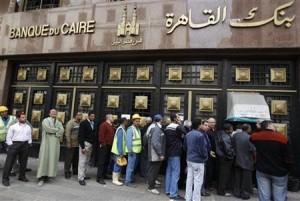 The Banker magazine said five Egyptian banks have entered the top 1,000 world banks, alongside 78 other Arab banks, according to “Tier1Capital.” Egyptian banks that made the ranking based on Tier-1 capital are the National Bank of Egypt (NBE), Banque Misr, and the Commercial International Bank (CIB).

Others are the Arab African International Bank (AAIB) and Banque Du Caire.

A report released over the weekend said banks in the world, for the first time since the global financial crisis, returned to profit of $920 billion which is 23 per cent more than their previous peak of $786 billion achieved in 2007 before the financial crisis.

The UAE was home to the largest number of Arab banks on the top 1,000 banks list, with 19 banks. Saudi Arabia followed the UAE with 12 banks, while Lebanon, Qatar and Bahrain were represented by nine banks for each country.

Kuwait entered onto the list with eight banks, followed by Egypt and Oman, with five banks each. There were also four banks from Morocco, two banks from Jordan and one bank from Libya.

The Banker, a publication of Financial Times Newspaper which is regarded as the most influential newspaper in the world, is a global financial intelligence magazine published since 1926. It is the definitive publication that provides guide to bank ratings and analysis globally and the definitive reference on international banking for finance experts, governments, chief finance officers, CEOs, Central Bank Governors, Finance Ministers, and other decision makers globally.