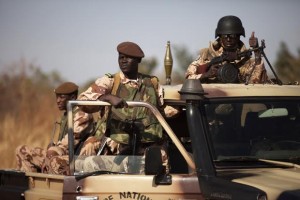 Three were killed after their patrol vehicle hit a landmine on Monday in a forest in central Mali, Defense Minister Tieman Hubert Coulibaly said.

“Today again, you lost three brothers in arms to a land mine explosion,” Coulibaly told Malian soldiers in Sevare, where he was visiting following the weekend attack.

The blast took place at a forest near the town of Diafarabe about 600 km northeast of the capital in the Mopti region, killing three soldiers and wounding three others.

“The soldiers were informed by villagers of the presence of armed men near a village and the soldiers went over to investigate,” Souleymane Dembele, a Malian defense spokesman said.

Sahara-based Islamist militant group al-Mourabitoun has claimed responsibility for a hotel siege in central Mali at the weekend in which 17 people died.

The attack began early on Friday and ended nearly 24 hours later when security forces stormed the building in the city of Sevare, some 600 km northeast of the Malian capital Bamako.

The dead included nine civilians, five of whom worked for the U.N. mission in Mali (MINUSMA), as well as four Malian soldiers and four militants.

In March, the group claimed responsibility for an attack on a restaurant in Bamako that killed five people, including a French citizen and a Belgian security officer.