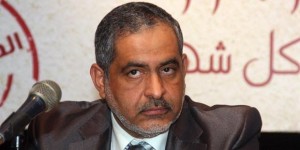 Abu al-Ela Mady, chairman of Wasat Party, has been in custody since military ouster of Islamist president Mohamed Mursi in July 2013, following mass protests against his rule.

He was accused of murder, attempted murder, thuggery, terrorizing citizens and arms possession.

A criminal court approved on Monday an appeal submitted by Mady’s defense and ordered his release.

He is not facing any other trials and therefore will be released from custody, his son told Aswat Masriya, while his lawyer said Mady’s release does not mean the case against him has been closed.

The leader of the Muslim Brotherhood, Mohamed Badie, his deputy, Khairat el-Shater, and other Brotherhood leaders are also defendants in the case, judicial sources said.

Mady, 57, was a member of the Muslim Brotherhood until leaving in the 1990s hoping to establish a more liberal-leaning Islamist party.

The Wasat Party was part of the pro-Mursi Anti-Coup Alliance. The alliance was formed in late June 2013 to voice its support for Mursi’s “legitimate” presidency.