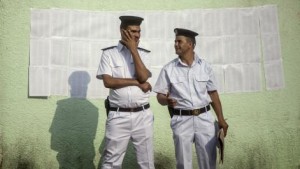 Protesting police officers in the province of Sharqiya, Nile Delta region, broke into the province’s security directorate after closing down six police stations.

Personnel of the Central Security Forces (CSF), Egypt’s riot police, were called to disperse them but the situation degenerated leading to protesting police officers firing warning shots after tear gases were thrown at them, according to Al Ahram newspaper.

The protesters are said to be low ranking officers who have been calling for better economic packages and for the payment of their June and July bonuses. They also want to gain access to the same hospitals used by higher-ranking officials. They have been protesting since Saturday.

Some of their colleagues in other provinces have shown solidarity to their demands and a source from a lower-ranking policemen’s club in Alexandria stated that President Sisi should intervene to solve the crisis because the Minister of Interior is not concerned about the ongoing “calamity.” The source has signaled that the situation in Alexandria could escalate if the demands of Sharqiya policemen are not considered.

A security source has claimed that the protesters are being supported by the Muslim Brotherhood and stressed that the Interior ministry “will take the necessary legal action against those who incited and participated in the strike.”

Linking the protesting policemen to the banned Muslim Brotherhood could lead to the application of the new anti-terror law since the group is classified as a terrorist organization.

After the confrontation with the CSF, the protesters started calling for the dismissal of the province’s security director General Khaled Abdel Rahman Yehia as well as Interior Minister Magdy Abdel Ghaffar.

Since 2011, protests by low ranking policemen have been frequent in Egypt.