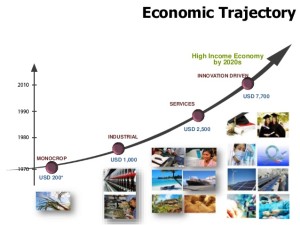 Mauritius’ economy is expected to grow at an annual average rate of 5.5 percent from 2017 driven by higher investments and a focus on manufacturing goods, the Indian Ocean Island’s prime minister said on Saturday.

“We are targeting an average growth rate of 5.5 percent annually as from 2017,” The Prime Minister Anerood Jugnauth told a gathering of top government and private sector officials.

The manufacturing sector, which accounts for 18 percent of GDP, is expected to grow to 25 percent in the next three years.

The Island’s $10 billion a year economy depends on tourism, financial services and exports of agricultural goods.

“There are, right now, some 40 major private sector investments projects to the tune of 183 billion rupees, of which foreign direct investment represent 140 billion rupees,” the prime minister said.

“These projects have the potential of creating 100,000 new direct and indirect jobs within the coming five years. Some 16,000 new jobs will be created during the current financial year”.

Situated in the southern Indian Ocean about 1,200 miles off the African coast, Mauritius wants to be the go-to country for entrepreneurs seeking opportunities in Africa. With strong economic and governance fundamentals, a savvy bilingual workforce and a network of agreements with African countries, Mauritius is already being used by major Indian and Chinese companies to expand into the continent.