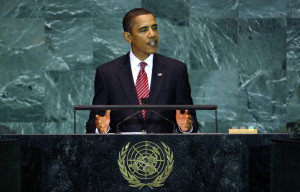 Syria was a key issue in Presidents Obama and Putin speeches at the ongoing 70th U.N General Assembly but their priorities in the war-torn country share similitude in fighting the Islamic State but diverge on President Assad’s outcome. Russia, Iran and Hezbollah are active in the Syrian war and new reports have emerged that China is also joining the group after its military vessels docked at the Russian naval station at the Syrian port of Tartus during the weekend.
Syria is yet to speak at the event but Assad has ruled out stepping down and has vowed to only negotiate with opposition figures within the country.
After a closed door 90 minute meeting between Putin and Obama during which the activities of the Islamic State were discussed, a senior White House official said the two leaders “fundamentally disagreed” on Assad’s role and thinks that “Russia certainly understand the importance of there being a political resolution in Syria and there being a process that pursues political resolution.”
Putin said after the meeting that “there is a basis to work on shared problems” while his foreign minister Sergei Lavrov told RT Television that Russia reiterated its position in the meeting stressing that “we don’t have any attachments to anyone in the region” and the caliphate of the Islamic State is not an “alternative” to the Syrian State.
UN chief Ban Ki-moon is hopeful that cooperation between the two countries will help to pave a way for peace in Syria and defeat the Islamic State but China also seems to be sending its forces to the country and siding with Russia with several reports claiming that military advisers and hardware are slowly arriving.