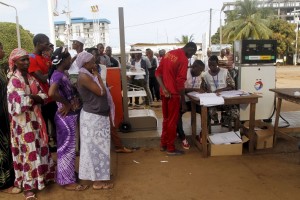 Guinea started counting votes in Sunday’s presidential election, which the opposition has said was marred by irregularities.

Some 6 million Guineans voted for eight candidates at more than 14,800 polling stations watched by anti-riot police, gendarmerie and international observers.

It is the West African country’s second democratic presidential election in more than 50 years, and comes as the country tries to shake the deadly Ebola virus that has killed more than 2,500 people.

At some polling stations, voting began only a few minutes behind schedule but in others there were complaints that paperwork and officials had not arrived by late morning.

The Independent National Electoral Commission (CENI) admitted on Saturday that about 7 percent of the electorate or hundreds of thousands of voters had not received their cards.

The opposition said it would probably refuse to accept the results.

European Union observers said there were some delays in opening polling stations. Overall, though, the voting progressed in a credible way, Frank Engel, the European Union’s chief observer, said.

There were no reports of violence on Sunday, after clashes earlier in the week between supporters of Conde and the opposition left at least three dead.

The first tally of votes will be released as early as Thursday, the electoral commission said.

According to analysts’ forecasts, the 77-year-old Conde is widely expected to win a second mandate, although the results were expected to be close enough to require a second round, probably against main rival Cellou Dalein Diallo.