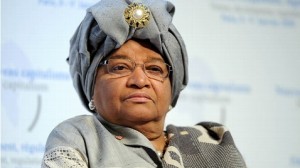 Liberia’s President Ellen Johnson Sirleaf has ordered the suspension of 46 government officials, including her own son, for failing to declare their assets to the Liberia Anti-Corruption Commission.
Charles Sirleaf, son of the president and deputy governor of the Central Bank, and David Anderson, chief of protocol at the executive mansion, are among the suspended officials. Several deputy ministers and provincial superintendents were also suspended.
The suspension, with immediate effect, will remain in force until President Sirleaf receives confirmation from the Anti-Corruption Commission that they have met the assets declaration requirements, the presidency said in a press release.
At their appointment, the officials were given 14 days to declare their assets.
Sirleaf who was first elected president of Liberia in 2006 and who was re-elected for a second term in 2011 had pledged to fight corruption. Despite her efforts and although she dismissed several ministers, she failed to win over the plight.
In June the International Crisis Group released a report warning that corruption, along with nepotism, impunity and unemployment, could “jeopardise Liberia’s democracy.”