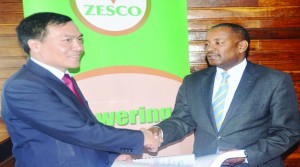 The project, which also aims to address the growing demand for electricity in the Southern African Power Pool (SAPP), would be financed by the Government and foreign financial institutions, among them, the Exim Bank of China.

Zesc’s acting managing director, Victor Mundende said that the development and construction of the KGL hydroelectric project needs to be fast-tracked completed and commissioned to meet the increasing energy demand both in Zambia and SAPP.

According to him, once completed, the facility would be connected to the national electricity grid via a 330-kilovolt transmission line approximately 100 kilometres up to the Lusaka West substation via the south multi-facility economic zone.

Sinohydro Corporation vice-president Liu Kai said that his firm would move on site as soon as all financing procedures were completed.