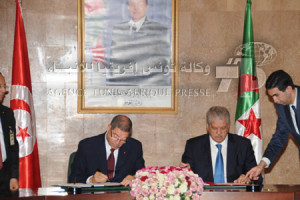 The session also discussed means of upgrading coordination between the two countries in the fight against terrorism, organized crime and smuggling and also in matters of security and intelligence sharing.

Under one of the just concluded agreements, Tunisians will be allowed to work in Algeria if they have a work contract signed by the employer.

The new agreement will come into force before end of 2015. The two sides stressed the need to re-activate the bilateral convention on residence signed in 1963. This convention provides for Algerian and Tunisian nationals’ access to either country job market, ownership, free movement, stay and financial transfers.