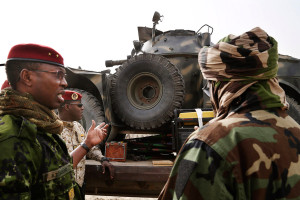 Chad’s government, on Monday, imposed a state of emergency in the Lake Chad region after a series of raids and suicide bombings last weekend by Nigeria-based Boko Haram members.

The decree stated that the governor of the remote region will have the authority to ban the circulation of people and vehicles, search homes and recover arms.

The country has banned the full-face Muslim veil and ordered security forces to seize burqas from markets and burn them.

Also vehicles with tinted windows had been barred from the streets.

Chad, Niger and Cameroon have all suffered a spill-over of violence from Boko Haram’s northern Nigerian strongholds.

The group has waged violent attacks in Nigeria over the past six years, carrying out a bloody campaign that has killed thousands of people and displaced more than a million others.

As the group encroaches across the border into neighboring countries, Lake Chad’s islands, surrounded by swamps, are a convenient base for the terrorists.

About 60,000 people in the area have had to leave their homes. Many of them evacuated the islands out of fear of falling victim to attacks.

Chad is host to a new regional force set up to tackle the Nigeria-based militant Islamists.

The United States has also sent troops to provide intelligence and other assistance to counter Boko Haram in the region.