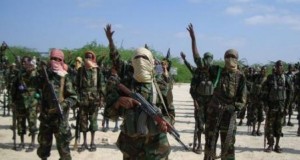 The Al-Qaeda linked Shebab fighters have warned they will “cut the throat” of members who pledged allegiance to Islamic State.

“If anyone says he belongs to another Islamic movement, kill him on the spot,” top Shebab official Abu Abdalla, said in a radio broadcast on Monday.

Somalia’s Al-Qaeda branch has lost much ground in recent years but remains a threat in both Somalia and neighbouring Kenya, where they have carried out a series of attacks.

Last month Sheikh Abdulqadir Mumi, a top leader and recruiter for the group pledged allegiance to IS from his base in the remote Galgala Mountains, in the semi-autonomous region of Puntland, located in north-eastern Somalia.

The move may turn out to be largely symbolic, given that reports indicate only 20 of Mumi’s estimated 300 followers opted to switch sides, but it has at least given IS its first official outpost in East Africa.

Mohamud said the reported divisions were “symptomatic of a group that has lost its way”, and warned that Somalis “do not need a new brand of horror and repression”.

The Shebab, East Africa’s long-time Al-Qaeda branch, is fighting to overthrow the internationally-backed government in Mogadishu, which is protected by 22,000 African Union troops.