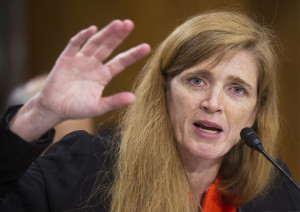 Two weeks after Rwanda’s upper house of parliament unanimously approved a constitutional amendment to allow President Paul Kagame to seek a third term, the United States broke the silence on Tuesday and said it expects Kagame to step down.

According to US Ambassador to the United Nations Samantha Power who has assumed the Presidency of the Security Council for the month of December, President Paul Kagame must set an example for his region and step down at the end of his term in 2017.

“President Kagame has an opportunity to set an example for a region in which leaders seem too tempted to view themselves as indispensable to their own countries’ trajectories,” Power told a news conference.

Kagame is the latest long-serving African ruler to attempt to extend his hold on power. Similar moves have already sparked violence and instability in countries like neighbouring Burundi and the Republic of Congo.

The US diplomat said everybody is aware of all of the parliamentary manoeuvrings that have occurred and that Rwanda, which has been a model in matters of public health, women’s representation, and education, should make itself an example on democratic governance and on the importance of term limits. “Nobody is indispensable,” she said, expressing hope that President Kagame would follow through on the commitments he has made many times in the past to allow the next generation of leaders to come forward.

Kagame, 57, has been at the forefront of Rwandan politics since 1994, when an offensive by his ethnic Tutsi rebel force, the Rwandan Patriotic Front, put an end to genocide by Hutu fighters that left an estimated 800,000 of his community dead.