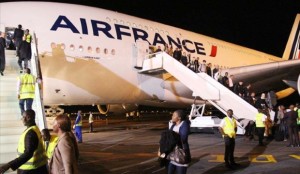 “In five or ten years, it will be a strategic destination,” the airline’s chief, Alexandre De Juniac told reporters.

Air France-KLM’s local partner airline, Air Cote d’Ivoire, will be the “recipient” for West African passengers travelling to cities across the region.

De Juniac also said Kenya’s capital Nairobi would become a hub for east Africa, based on its partnership with Kenya Airways.

Buoyed by the economic recovery over the past two years and the peaceful October election, Ivory Coast government is attracting more airlines and investors.

Last month The International Monetary Fund projected that the economy of the top cocoa producer, now in the midst of a post-war revival, will grow by 8.4 percent this year and next year while inflation is expected to remain moderate.