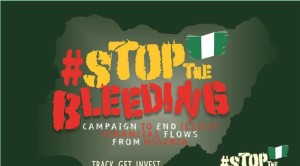 Nigeria is bleeding. But it’s not a physical wound; it’s a financial one, and it’s allowing more to leave in illicit flows – money that is illegally transferred, earned, or utilised – than the amount received in development aid.
To “stop the bleeding,’’ a Civil Society Cluster groups drawn from different civil society organizations in Nigeria will on Tuesday, 8 December hold a rally to commemorate the International Anti-Corruption Day.
According to a statement release on Sunday, the purpose of the rally, tagged #StoptheBleeding, is not only to create public awareness of the magnitude and socio-economic impacts of corruption but the broader issue of Illicit Financial Flows (IFFs) in Nigeria.
The recent Thabo Mbeki’s report on IFFs says Africa is losing over $50 billion dollars a year to IFFs and the bulk of that stems from Nigeria with the largest economy in Africa. Between 1970 and 2008, the cumulative amount lost by Nigeria to IFFs is $217.7 billion, which accounts for 30.5 percent and 79 percent of the entire share of IFFs for Africa and West Africa respectively. According to the African Development Bank, Nigeria lost $83.3 billion between 1960 and 2011 to corruption.
Campaigners for tax justice point out that even legal economic measure such as ill-advised tax incentives also bleed Nigerian economy of resources. Depending on how it is defined, “illicit,” it should be noted, can include not only “illegal” flows, but also “illegitimate” flows which are even harder to track and combat.
“We applaud the current administration’s commitment to tackling corruption, especially in the oil and gas sector. Nevertheless, it is important that the scope of engagement is broadened to ensure that multi-layered activities of perpetuators of IFFs are blocked and those culpable of such acts face the wrath of our laws,’’ campaigners said in the statement