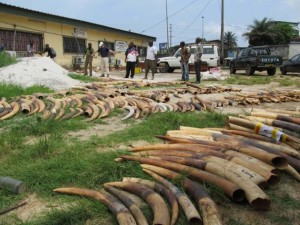 Police in Gabon arrested two ivory traffickers in the capital Libreville with 206 kilograms of ivory taken from 21 slaughtered elephants, a wildlife protection group said Wednesday, describing it as a “record seizure”.
According to Conservation Justice, a Gabonese NGO that campaigns against poaching and wildlife trade, “Adamou Ba Mamadou and Adamou Nouhou, two Gabonese citizens, were arrested by the water and forests authority and police investigators as they were trying to sell their wares.”
“Both were buying ivory throughout the country before exporting it to Cameroon, indeed towards West Africa, before the ivory arrived at its final destination in Asia. This was really an international trafficking network,” Conservation Justice said.
Gabon is the last sanctuary for elephants in Africa. For example, there are now 20 times more elephants in Gabon than in the Democratic Republic of Congo, even if that country is 10 times larger than Gabon.
The illegal slaughter of elephants and rhinos is on the rise, an unsavoury aspect of Asia’s scramble for African resources driven by the growing purchasing power of the region’s newly affluent classes.
The most vulnerable countries were said to be Cameroon, which has deployed army patrols in its northern national parks, the Central African Republic, Chad and Gabon.
Gabon is seeking to promote ecotourism and has poured money into protecting its 50,000 forest elephants, prized by ivory poachers for their particularly hard, straight tusks.