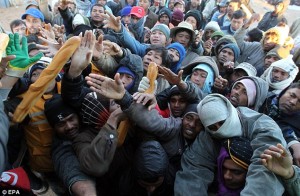 The United Nations on Wednesday called on the international community to provide $165.6 million in aid to Libya displaced and violence affected people.
“We call on the world to extend its hand to suffering people in Libya,” Ali al-Zaatari, the UN humanitarian coordinator for Libya, told a news conference.
“We need $165.6 million in 2016. If we don’t get that amount, which is modest in comparison with what is spent on armaments, for example, then we can expect the humanitarian crisis to worsen.”
According to the UN Office for the Coordination of Humanitarian Affairs, 6.3 million residents need 2.44 protection and humanitarian assistance.
Zaatari also called for a humanitarian ceasefire and for opening up corridors so that aid can reach those in needs.
The needy included people forced to flee their homes and those living in conflict-hit areas, as well as refugees, asylum-seekers and migrants, OCHA said.
Syed Jaffar Hussain, the World Health Organization’s representative in Libya, said the money was needed for basic essentials, such as drinking water, sewers, vaccinations and other medicines, and maternity wards.
Clashes between government troops and rebels in Libya have left 400,000 people forcibly displaced.
In some areas, residents have abandoned their cities as many as five different times. In Benghazi, in northern Libya, 90,000 people are homeless.
The North African country has plunged into a crisis ever since the ousting and killing of dictator Muammar Gaddafi, in 2011. Since then, rebel groups and government forces have gone into battle. Oil production, the country’s principal revenues source, has been halted in several areas within Libya.