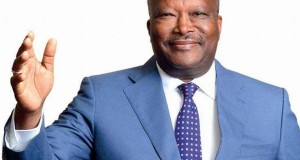 Roch Marc Christian Kabore, Burkina Faso’s newly elected president who took the oath of office Tuesday, said his election after a chaotic transition is a triumph for “democracy and freedom.”
“This is the triumph of the alternative that we have been waiting for so long. It’s the triumph of democracy,” Kabore said in a speech.
The 58-year-old Kabore won the Nov. 29 presidential elections with more than 53 percent of the votes. He is the second civilian president since the country gained independence from France in 1960.
As Burkina Faso’s new president, Kabore said he will defend “justice and equity,” and warned that the popular insurrection of October 2014 was due to “a lack of justice and truth.”
He promised to tackle “fundamental needs” such as sanitation and to revive an economy that has flagged since the popular uprising that toppled his veteran predecessor 13 months ago.
“We need to organize ourselves to take in hand the whole country’s preoccupations because our first objective is not simply to revive the economy but at the same time to satisfy the fundamental needs of the whole population,” the former prime minister said.
“The challenges are numerous and multiple in Burkina Faso. They include education, healthcare, access to clean water and the economy,” he said.
The ceremony conducted at a stadium in the capital was attended by regional leaders.