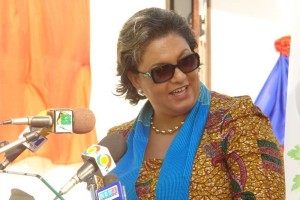 The first two of the 17 detainee scheduled to be released from Guantanamo Bay prison this month will be transferred to Ghana, U.S. military officials announced Wednesday.

The detainees, Muhammad Bin Atef and Khalid Muhammad Salih Al-Dhuby are Yemeni and both have been held since 2002.

Both of the men released Wednesday, were held as enemy combatants, accused of training with al-Qaida and fighting with the Taliban. They had been cleared for release in 2009, but the U.S. won’t send Guantanamo prisoners to Yemen because of instability there and officials had to find another country to accept them.

Ghana, which has not taken in any Guantánamo prisoners previously, said the men were cleared of all terror charges, but suggested they may only be allowed to stay in the country for a limited time.
“We have indicated our readiness to accept them for a period of two years, after which they may leave the country,” Ghana’s foreign ministry said in a statement.

“The United States is grateful to the government of Ghana for its humanitarian gesture and willingness to support ongoing U.S. efforts to close the Guantanamo Bay detention facility,” The U.S Department of Defense stated.
Since 2002, a total of 779 detainees have been held at Guantanamo in connection with Washington’s “war on terror”.
President Barack Obama has made closing drown the military prison one of his goals before he leaves office.
This is the first time that the U.S. has transferred Guantanamo prisoners to a sub-Saharan African country.