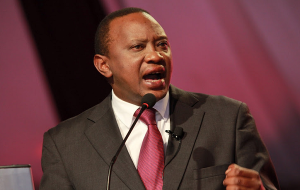 Kenya’s President Uhuru Kenyatta on Tuesday vowed to continue war against Al-Shabaab in Somalia, saying Kenya remains unbowed and would continue to stand with the international community to free Somalia from oppression by terror groups.

Kenyatta addressed the nation following an Al-Shabaab attack on an African Union Mission in Somalia (Amisom) over the weekend that killed several Kenyan soldiers.

“Let us all continue praying for our forces in Somalia. My Government will give them all the support they need and for those who carried out the attack thinking they can scare us, they will not have space to breath,” said the President.

He reiterated that Kenya would not be cowed and that the government would pursue the terrorists and make sure there is peace in Kenya and neighbouring countries.

“We will join hands with other neighbours to make sure there is peace in Somalia because that it is key to development,” he said.

He insisted that Kenya cannot afford to relent in the fight against the militants, adding that a lot had been achieved since 2011, including the revival of tourism in the country.