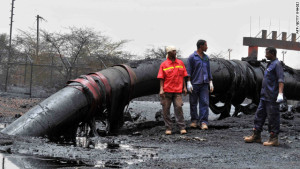 Sudan on Thursday announced it accepted to cut the transit fees for South Sudanese oil crossing its territory via pipeline to the Red Sea.

It gave no more details and it was not immediately clear what the new transit fees were.

Last week, South Sudan’s Petroleum and Mining ministry said it may be forced to shut down its oil fields in Upper Nile state and turn off pipeline should the Sudanese government decline a request to lower its oil transit fees.

The pipeline between the two countries is operated by Khartoum’s government.

Officials in Khartoum said the new measure aims to support the recovery of the new state after two years of war and it took into consideration the vertiginous drop in oil prices.

South Sudan agreed to pay to Khartoum $9.10 for oil produced in Upper Nile state and $11 for oil from Unity state in August 2013. Juba also agreed to pay the Transitional Financial Assistance to the agreed oil transportation fees. The global oil price currently stands at $28 per barrel.

South Sudan currently produces 160,000 barrels of oil per day, despite a decline in its oil production due to the violent conflict that engulfed the world’s youngest nation