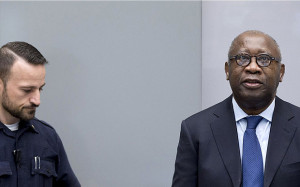 Ex-President of Côte d’Ivoire Laurent Gbagbo pleaded not guilty on Thursday during the opening of his trial at the International Criminal Court (ICC.)

He faces charges relating to the country’s civil conflict that erupted after he lost elections in 2010.

Gbagbo, 70, is the most senior politician to stand trial at the global war crimes tribunal since it was set up 13 years ago. He remains influential at home and his trial could rekindle tensions in his country.

His supporters and many victims of the 2010 clashes have accused investigators of being selective and of mainly targeting the Gbagbo camp.

Dozens of Ivorians massed outside the court on Wednesday ahead of the trial, which is expected to last months, to show their support for Gbagbo.

ICC Chief Prosecutor, Fatou Bensouda told reporters at The Hague that the trial aims to uncover the truth.

Laurent Gbagbo was surrendered to the ICC on 30 November 2011 and he first appeared before the Pre-Trial Chamber on 5 December 2011.

On 12 June 2014, Pre-Trial Chamber I confirmed, by majority, four charges of crimes against humanity (murder, rape, other inhumane acts or – in the alternative – attempted murder, and persecution) against Gbagbo and committed him for trial before a Trial Chamber.