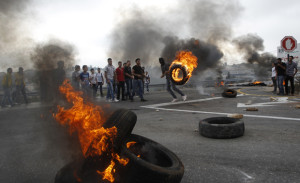 The soaring of prices and street protests have forced the aid dependant Palestinian Authority in urging Israel to review the economic agreement that has determined its customs and tax rates for almost two decades. The authorities are facing financial hardships following a decrease in aid support from Western and Gulf countries.
Palestinian Civil Affairs Minister, Hussein al-Sheikh, said “eighteen years of the Paris economic agreement has become a heavy burden on the Palestinian people and led to very difficult financial and economic conditions.” Prime Minister Fayyad announced that he is willing to hand in his resignation if it is demanded by the public as protests become frequent.
A letter requesting the opening of the Paris accord and its amendment by a joint committee has already been sent to their Israeli counterparts. The latter has been criticized by U.N agencies and Palestinian economists for being selective in the application of the sections of the Oslo interim peace deals outlined in the Paris Protocol of 1994. Israel is accused of only applying it in its favor. The Paris Protocol maps out an economic blueprint for a customs union between Israel and the Palestinian territories and pegs value added tax to Israeli rates, now at 17%, effectively blocking any steep price cuts in the West Bank.
In a reply to their demands, Amos Gilboa, a senior Israeli Defense Ministry official said they “have to examine exactly what they are proposing and to see if it’s practical” before making a decision.
The Palestinian authority is witnessing a substantial budget deficit and external debts and necessities permitting the Palestinians to engage in free trade agreements with other states and mandating access to Israeli markets have not transpired.