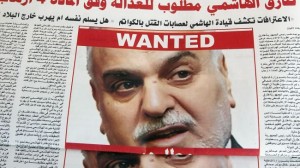 The Iraqi fugitive Sunni Vice-President Tariq al-Hashemi has been sentenced to death by hanging as a new wave of deadly blasts and attacks rocked the country claiming over 100 lives.
Mr. Hashemi, who fled to Istanbul after he was accused by Shiite Prime Minister Nor Al-Maliki of running a death squad targeting the Shiite Iraqis. He denies the charges, saying they are politically motivated. He also accuses his foe Al-Maliki of orchestrating a crackdown on Sunni opponents, and refused to appear in a court he said was biased.
The Sunnis, who were the dominant political forces under Saddam Hussein, feel currently sidelined by the emboldened Shiites. Showdown between the two groups has intensified in Iraq since the American forces pullout, leaving these two major factions fighting for power and influence.
The death sentence in absentia issued against the top Sunni leader is likely to fuel further sectarian tensions in the country which is on the brink of a civil war and torn by infighting among Sunni, Shiite and Kurdish political factions.
The verdict was accompanied by a string of bombings and shootings targeting several cities across Iraq and particularly Shiites zones. These attacks are among the worst surge of violence and the deadliest in Iraq wherein the government is struggling to stabilize the country and stand up on its feet while fighting Islamist militants and Al Qaeda operatives.