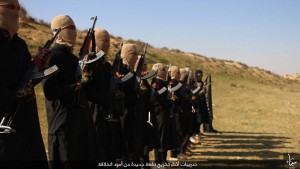 The Islamic State group’s offshoot in Egypt released photos of a new training camp allegedly set up in the country’s desert. Egyptian security forces are fighting against militant and terror groups in the northern part of the country especially in the Sinai Peninsula.

The released images taken at the Abu Hajr al-Masri training camp in the remote Sinai desert highlight the constant danger that exists in the area. The government is called to increase security as safety concerns continue to be a major issue, keeping tourists out of the country.

The Abu Hajr al-Masri training camp is named after a former Egyptian terrorist. The images released by the Islamic State showed a group of what seems to be recruits dressed in balaclavas and black robes performing some exercises. They were seemingly having fitness training, practicing with weapons and military tactics in different formations. Some of the fighters are shown tackling an assault course, including jumping through burning metal hoops and crawling along the ground.

Authorities in Cairo have not reacted to the images released by the extremist group that analysts think could have been made public in defiance of the government’s efforts to free the Sinai peninsula from terrorist and militant groups.

The pictures of an IS training base in the North African country could serve as a deterrence to would be visitors considering that there was an attack on a hotel in Hurghada in January. In October 2015, the Islamic state claimed responsibility for downing a Russian passenger Airbus killing everyone on board. Russia suspended its flights to Egypt and will resume them only when safety requirements at Egyptian airports are approved by Moscow.