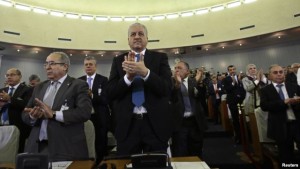 Algeria’s two chambers jointly passed the amended constitution on Sunday with 499 members of parliament voting in favor of it with 2 against and 16 abstentions.

89 MPs boycotted the session. President Bouteflika hailed it as a milestone in the country’s democratic actions while opposition figures say the reality is different.

Senate speaker Abdelkader Bensalah read a message on behalf of Bouteflika saying that the new constitution marks a “democratic renewal” that would help to attain “new democratic victories” namely democracy, rule of the law and respect of human rights but warned that they have to be “patiently built.”

Former prime minister and 2014 presidential candidate, Ali Benflis, said the constitutional amendments “solve the regime’s problems” and strengthen “a constitutional power grab” by the ruling party. Djamel Zenati, a former MP and an opposition, said the constitution “finally brings together the main elements necessary to build a democracy” but “violating laws has become the law” in Algeria. Djelloul Djoudi lamented that there are “positive things” in the constitution “but they do not reflect any real political reform.”

The text was also criticized by human rights NGOs as an attempt to shelve the crimes perpetrated by the regime during the nineties of the past century that cost the life to some 200,000 people.

The Algeria diaspora adopted the same stance, denouncing the provisions that ban Algerians holding dual nationalities from applying for senior state positions as if they were traitors to their native nation.