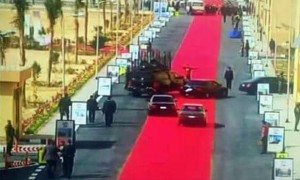 President Sisi attracted unwanted criticism on social media when his motorcade drove on a 4km-long red carpet to inaugurate the opening of a social housing project in the suburbs of the capital. The carpet laid on public roads for the event was seen as a move contrary to the president’s call for Egyptians to cope with austerity measures but Brigadier General Ehab el-Ahwagy said it was meant “to beautify the general area” and give “a good impression of the celebration” broadcasted worldwide.

The local Al-Maqal newspaper devoted much of its front page space to the issue. It asked “how is the president asking us to tighten our belts while the 4km red carpet says otherwise?” The presidential move was mocked on Twitter and Lawyer Gamal Eid estimated the carpet to cost around 1.6m Egyptian pounds given that it is 8metres wide and a square meter costs 50 Egyptian pounds.

Brigadier General Ehab el-Ahwagy denied criticisms that it was a wasteful gesture as the country’s economy and finances continue to struggle while social problems persist. He claimed that the carpet was not bought by the Sisi administration and that it had been used for more than three years on similar occasions. El-Ahwagy added that “it gives a kind of joy and assurance to the Egyptian citizen that our people and our land and our armed forces are always capable of organizing anything in a proper manner.”

During the opening ceremony of the housing project in the 6th of October City, southern Cairo, President Sisi warned that the State can no longer subsidize drinking water.

The government spends $5.1 million on a daily basis to provide clean water and only part of the cost is covered by consumers, he said adding that “the state is unable to continue this way.”