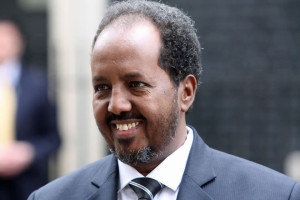 Somalia’s President, Hassan Sheikh Mohamud, on Sunday, said members of the extremist Islamist Boko Haram group were trained in Somalia before returning to West Africa to carry out their terror activities.

Hassan Mohamud made the comments at the 52nd Munich Security Conference that was attended by around 600 leaders, including 30 heads of state.

He said his country has evidence that Boko Haram militants had been trained in Somalia. “There is, therefore, a need to support Somalia in its fight against al-Shabab terrorists,” he said.

“Without a stable Somalia, the whole region of the Horn of Africa will remain unstable and by and large, the African continent,” he said.

It was not clear from his comments whether he believed al Shabab was still training Boko Haram fighters, who have pledged allegiance to the Islamic State group last year.

He explained that the “terrorists” were “linked together” and were “so organized” that the international community needed to coordinate an effective response.

Al-Shabab militants, who are linked to al-Qaeda, staged numerous attacks on government officials and civilians. They also conduct raids on the Kenyan territories.

Boko Haram fighters killed over 20,000 people since the start of their insurgency in Nigeria in 2009.

The African Union and a number of neighboring countries have joined Nigeria in the fight against the group.

While the extremist group has lost some territory, it has not lost its capability to launch suicide and car bomb attacks or kidnap women and children for ransoms.