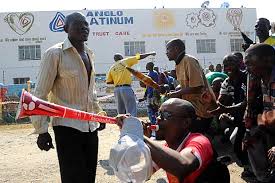 South Africa’s Anglo American Platinum on Friday said it will cut up to 2,000 jobs at its Union and Twickenham mines.

“The Company expects approximately 2,000 jobs in total to be impacted by the proposed restructuring,” the company said in a statement.

“This proposed restructuring of Union mine is necessary irrespective of whether or not a sale of the operation takes place,” the producer said.

It says the current economic outlook remains uncertain and it’s been forced to intervene further in order to sustain the company’s long term structure.

“We are proposing to undertake further restricting at Union Mine to ensure that the operation is both cash positive and sustainable. We have also resolved to place Twickenham Platinum Mine on maintenance,” Spokesperson Mpumi Sithole said.

The National Union of Mineworkers (NUM,) which is the majority union at the mine, said it would oppose the job cuts.

“We are worried about the jobs bloodbath in the South African mining industry. Are mining companies here to create jobs or are they here to cut jobs? It looks like the companies are here to cut jobs and focus on profits,” NUM spokesman Livhuwani Mammburu said.