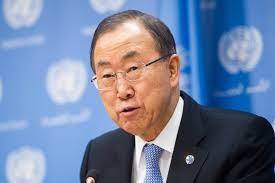 UN Secretary General Ban Ki-moon who visited Algeria over the weekend touched on the many challenges facing the North African region with focus on the Libyan crisis.

Speaking to reporters after talks with Algerian officials, Ban called on “all external actors” to help calm the situation in Libya because if things don’t improve politically, he said, “the humanitarian crisis will worsen and threats to people’s security, including attacks by Daech, will multiply and expand.”

Libya is a battle field between the rival governments based in Tripoli and Tobruk. Daech added to the chaos in 2014 after it sprung in the coastal city of Sirte.

“There is alarming information coming from Libya about grave acts that could amount to war crimes” Ban stated without mentioning the groups that could be held responsible.

He also recalled that his first visit to Algeria was “very painful,” in reference to the 2007 car bomb attack on UN offices that left 17 of its personnel dead.

The UN chief’s vicit to Algiers was part of a tour that led him to Mauritania and to the Polisario-controlled refugee camps in Tindouf, in south western Algeria.

The tour was meant to put the negotiations process about the Western Sahara issue back on track, as he deplored that no real progress has been made in negotiations towards a “just, lasting and mutually acceptable solution.”

He also deplored the sufferings endured by the camps’ populations due to the ongoing regional conflict, saying he is “deeply saddened” by what he calls “this humanitarian tragedy.”

He was also expected to visit the headquarters of the United Nations Mission for the Referendum in Western Sahara (MINURSO.)