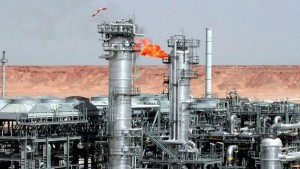 Prime Minister Abdelmalek Sellal during his visit to Annaba, 600km east of Algiers, said the country is not “in bankruptcy” despite the low global oil prices because the country has “important assets” that would enable it surpass the price crisis. Algeria’s economy is dependent on hydrocarbons but Sellal said the country could count on the expertise of its citizens who have already gained “recognition abroad and can do the same in their country.”
Algeria’s foreign reserves have depleted due to the low prices and the government had to suspend some development projects as it minimizes public expenses. The prime minister said the country can boast of its young executives and experts who can “achieve miracles” as its key assets while calling on citizens to uphold and sacrifice for the nation’s interests.
Elsewhere, Energy Minister Saleh Khebri told reporters on the sidelines of the 6th Show of Oil Equipment and Services that Algiers will support “all decisions which allow recovering stability of the oil market.”
Saudi Arabia, Qatar, Venezuela and Russia met in Doha at the beginning of the year to discuss the freezing of production by both OPEC and non-OPEC members in order to boost prices to recover. Khebri said “even if this is not enough, freezing is a first step as it enables the two world’s biggest producers (Saudi and Russia) to sit on the same table and discuss in the interests of the producing countries.” The market is reportedly oversupplied. He said they are ready to adhere to it if a deal is reached adding that Algiers is willing to reduce production if freezing is not sufficient. Iran had said that the freezing proposal is laughable as it plans on increasing production.