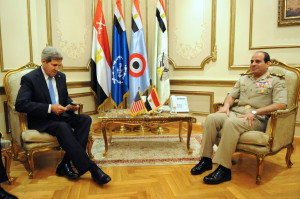 US Secretary of State John Kerry said Washington is “deeply concerned” by the deterioration of the respect for human rights in Egypt and the investigation on NGOs activities but his statement received stiff rejection from Egyptian Foreign Minister Sameh Shoukry and Deputy Speaker of the parliament Soliman Wahdan.

Minister Shoukry stated that “human rights issues are the responsibility of the Egyptian government, which is very keen to implement and put into action the constitution, which stipulates respect for and commitment to human rights.” Deputy Speaker Wahdan on his part said the statement released by the US State Department marks another “American intervention in Egypt’s internal affairs.”

“It has become a tradition for American officials to seize some separate cases, like the current NGOs investigation, as an excuse to issue judgments… and meddle” in domestic affairs, Wahdan said.

An Egyptian judicial committee ordered the freezing of assets of four Egyptian human rights activists and their families on Thursday for allegedly receiving illegal funding from foreign sources following investigations that began in 2011.

A day after, the US criticized the decision to reopen investigations on several human rights NGOs and urged Cairo to ease restrictions on freedom of association and expression and allow NGOs “to operate freely.”

The European Parliament also voted a non-binding resolution last week criticizing the human rights situation in Egypt but Wahdan said European lawmakers should “exercise patience and not jump to hasty conclusions” while stressing that the death of the Italian student, Giulio Regeni, should not be exploited and it would not affect the “deep-rooted relations” between Rome and Cairo. A parliamentary delegation will be visiting the European parliament to respond to the resolution.