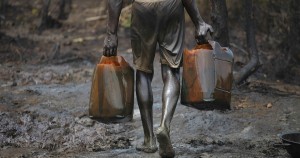 Angola, Africa’s second largest crude producer, on Wednesday said it plans to start talks with the International Monetary Fund about a loan to help its oil-dependent economy cope with the slide in oil.

Despite the country’s oil and diamond resources, Angola suffers endemic poverty, with more than a third of the population of around 24 million living below the poverty line, according to the United Nations.

Fallout from the oil price crunch is inflicting even more pain on the already struggling poor and risks threatening the stability of the country.

According to the IMF, discussions would begin next week in Washington on what could be a three-year support plan for the government.

Angola will work with the Washington-based found to create policies aimed at strengthening “fiscal discipline,” simplifying the tax system, and improve transparency of public finances and in the banking industry.

“The IMF stands ready to help Angola address the economic challenges it is currently facing by supporting a comprehensive policy package to accelerate the diversification of the economy, while safeguarding macroeconomic and financial stability,” the Fund said in a statement.

Angola has depended on oil production for 95 percent of its export earnings and more than half of government receipts. Economic growth slowed to 3.5 percent last year from 6.8 percent in 2013, according to the IMF.