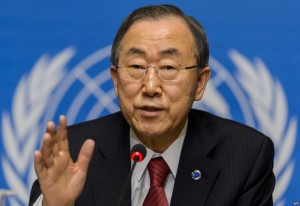 The United Nations is set to select a new secretary general at the end of 2016 as current leader Ban Ki-moon’s term runs out.

For the first time in the organization’s 70-year history, the candidates vying for the position will make their pitch for the job to world governments.

From this week on, all the UN member states will get a chance to question the candidates, in a move to make the usually secret selection process for the world’s top diplomatic post more transparent.

Eight candidates are in the race to succeed Ban Ki- moon in January 2017.

“We have decided collectively to open up the race,” French Ambassador François Delattre said of the new selection process.

The hearings “are important and new, and I do plan to attend to listen to each of the candidates, “Delattre said

The secretary general is chosen by the 193-member General Assembly on the recommendation of the 15-member Security Council, according to the U.N. Charter.

There has also never been a woman secretary general and many countries support the idea of the first female U.N. chief.