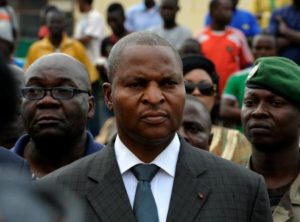 Three high-ranking jobs in the 23-member cabinet went to candidates who ran against Touadera this year in the first round of the presidential elections.

These are Josephe Yakete, who was named defense minister; Jean-Serge Bokassa, who was picked as interior minister; and Charles Armel Doubane, who will handle foreign affairs.

The new cabinet will also include several members who were ministers under the government of former President Francois Bozize. However, none of the ministers was picked from the Muslim and Christian militias that are behind the violence that plagued the country.

Prime Minister Mathieu Simplice Sarandji’s cabinet will have an uphill task of restoring peace in the country where sectarian violence has killed thousands while about a tenth of the population of 4.8 million, fled their homes.

Touadera, a former math professor and prime minister, emerged from a crowded field of candidates and won the February 14 runoff with nearly 63 percent of the vote.

His task will be to rebuild the economy, restore stability and reunite a nation divided between mainly Muslim rebels in the northeast and Christian militias in the southeast.