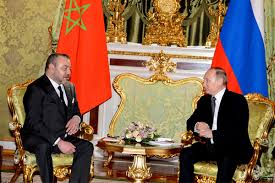 Morocco’s King Mohammed VI and President Vladimir Putin of Russia “agreed to strengthen their coordination and carry on contacts” on the Sahara issue “in order to reach, by the end of April, balanced and fruitful results.”

The two leaders made the decision on Tuesday during an extensive phone talk that mainly focused on the latest developments in the Sahara issue.

King Mohammed VI and the Russian President voiced “strong concern over the latest developments of the Sahara issue at the level of the United Nations Secretariat,” said the Royal office in a statement released in Rabat on Tuesday.

The two leaders “agreed to strengthen their coordination and carry on contacts on this issue in order to reach, by the end of April, balanced and fruitful results,” said the statement.

The phone talks between the Moroccan King and the Russian President took place amidst tensions between the Security Council and the UN Secretariat General.

The tensions were created after Morocco vehemently responded to the UN Secretary General Ban Ki-moon’s biased remarks and blunders during his visit to the Tindouf camps and Algiers early last month.

The North African country took a number of measures, including suspending its voluntary financial contribution to the UN mission stationed in the Sahara to monitor the cease-fire, the MINURSO, ordering the mission to close down its military liaison office in Dakhla, and expelling some 80 civilian staff members of MINURSO.

Following these measures, the Security Council members held several meetings and expressed serious concerns about these developments and the implications of the staff pullout. According to a document posted on its website, the Security Council’s immediate concern at this time “is to determine how best to manage the crisis surrounding MINURSO in a manner that allows the mission to continue to operate as mandated.”

The UN Security Council is due to hold its annual meeting on the Sahara by the end of the current month to debate the UN Secretary General’s report and vote on the extension of the MINURSO mandate.

Till the vote, Morocco and Russia will carry on contacts and coordinate action on the Sahara issue.

The Sahara issue had been discussed by King Mohammed VI and Vladimir Putin during the King’s visit to Moscow mid-March.

Putin had then voiced Russia’s support to Morocco in the Sahara conflict and affirmed opposition to any “infringement of the parameters” already defined by the Security Council.

The Statement on the Extended Strategic Partnership adopted by Russia and Morocco on the occasion of the Royal visit had pointed out that “The Russian Federation and the Kingdom of Morocco do not back any temptation for acceleration or precipitation of the political process, nor any violation of the parameters already defined in the Security Council resolutions” in search for a solution to the Sahara issue.

Russia also said that it “takes due account” of Morocco’s position regarding the settlement of the Sahara issue and “takes note of the socio-economic projects launched to develop the territory and improve the living conditions of the people living there.”

The Statement on the Extended Strategic Partnership also outlined that the two countries “pledge to preserve the territorial integrity of the two States and consolidate their unity and to develop actions of cooperation and partnership on all their territories.”

Morocco and Russia deem their Extended Strategic Partnership is a positive and constructive contribution to strengthening regional and international stability.