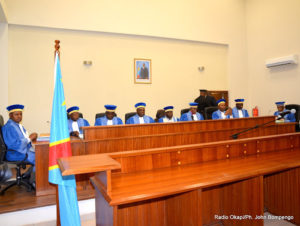 Members of parliament in Democratic Republic of Congo (DRC) want the country’s highest court to rule on whether President Joseph Kabila would stay in power if his government fails to hold the elections due in November this year.

Five years in power, President Joseph Kabila is supposed to leave office at the end of the year. However, four months into 2016 it’s becoming doubtful whether DRC’s logistic capacities will meet the requirements of an ambitious poll schedule.

The uncertainty over the polls has sparked debate over what the constitution prescribes if a vote is not held on time.

Kabila’s allies say that Article 70 of the constitution, which states that the president “remains in office until the installation of the new elected president” means that Kabila would stay in power if the election is delayed.

However, Opponents counter that the Senate president should replace Kabila in that case, basing their argument on Article 75 of the constitution, which transfers the presidency to the head of the Senate if the office is vacant.

Earlier this week, the African Union envoy for national dialogue in DRC said that it is crucial for elections in the country to be conducted before the end of the year.

The commission also acknowledged that it may be difficult for DRC to meet the constitutional deadline for the coming elections given the limited duration for all the preparations.

The AU envoy to the DRC, Edem Kodjo, is currently on a mediation mission in the country during which he is expected to bring a lasting solution to the political misunderstanding among political opponents.