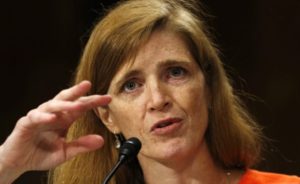 An armored jeep in the motorcade of United States Ambassador to the United Nations Samantha Power hit and killed a 7-year old boy in Cameroon on Monday.

Samantha Power was in Cameroon to show US support for the campaign against militant Islamist group Boko Haram.

Ms Power’s motorcade had been driving at more than 40 miles when the sixth vehicle in the convoy hit the boy after he darted on to the two-lane highway near the small city of Mokolo, local media reported.

One of the ambulances that was part of Ms. Power’s motorcade transferred the boy to a nearby hospital.

“Although the boy received immediate medical care from an ambulance in our convoy, he died shortly thereafter,” Ms Power said.

Power who said she learned of the death with “great sorrow” met the boy’s family to offer them condolences.

Several US officials were visibly affected, with one of Power’s aide turning away to cry as his boss met refugee children shortly afterwards, local newspaper reported.

Following the tragedy, the motorcade reportedly slowed to a steadier pace for the remainder of the day.