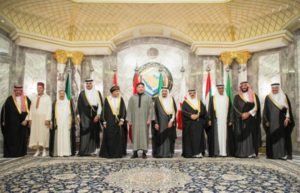 Morocco is Keen on diversifying its partnerships at the political, strategic, and economic levels although it remains committed to its strategic relations with its allies.

“Though it remains committed to its strategic relations with its allies, Morocco has, in recent months, sought to diversify its partnerships at political, strategic and economic levels,” said King Mohammed VI during the first Morocco-GCC summit held on Wednesday in Riyadh.

Part of this process, King Mohammed VI recalled his recent visit, last month, to Russia that he described as “successful.” “It has made it possible to turn Moroccan-Russian relations into an in-depth strategic partnership, and a number of major agreements have been signed in several crucial areas,” he said, adding, “We are also looking forward, in Morocco, to launching a strategic partnership with India, and also with the People’s Republic of China, to which I will soon be paying an official visit.”
The Sovereign who insisted that Morocco is free in its decisions and choices, and is not the exclusive preserve of any country; said his country will continue to honor the commitments it makes to its partners, and its partners should not think that their interests will be affected.
He reassured in this respect that “the convening of this Summit is not targeting any party in particular, least of all our partners. It is a natural, logical initiative by countries which are defending their interests, as all countries do.”

In his speech, the king dwelt on the firm partnership and special ties existing between Morocco and the six member countries of the Gulf Cooperation Council, namely Saudi Arabia, Bahrain, the United Arab Emirates, Kuwait, Qatar, and Oman.

“Thanks to our shared determination, we have managed to lay the foundations for a solid strategic partnership, which is the result of fruitful bilateral cooperation,” he said, adding that “Moroccan-Gulf partnership is not the result of transient interests or calculations. Rather, it derives its strength from a firm belief that ours is a common destiny and that we hold the same views on issues of common concern.”
The joint statement issued at the end of the Morocco-GCC Summit stressed that Morocco and the GCC countries constitute a strategic unified bloc, and that what affects the security of any one of them affects the security of the others. In this vein, the leaders of the GCC countries reaffirmed their unwavering position on the Moroccan Sahara issue that they consider as theirs.
They reaffirmed their support to the Sahara as Morocco’s and their backing to the Moroccan autonomy plan as the basis for any settlement of this regional artificial dispute.
They also reaffirmed their “total rejection of any act that may affect Moroccan supreme interests, on top of which the Moroccan Sahara issue.”

The Moroccan and Gulf leaders also discussed the conspiracies seeking to undermine their collective security, as they are all facing the same perils, the same threats, and voiced their shared determination to stand up together to all attempts aimed at undermining their security and stability, and to oppose any separatism plots meant to redraw the map of the region.

The Leaders also stressed the need to bolster their economic partnership through strengthening the human development process, facilitating trade and promoting investment.
The Summit was also an opportunity to examine opportunities to establish a more comprehensive cooperation between the GCC, Morocco and sub-Saharan African countries with the aim of strengthening security and stability.