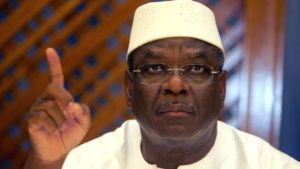 A Malian court has sentenced two men to five years in jail for a coup attempt in 2014 against Malian President Ibrahim Boubacar Keita, the Justice Minister said on Thursday.

“The Court of Assizes of Bamako, in its hearing on Wednesday, May 4, condemned Lieutenant Mohamed Ouattara and Sergeant Amara Sylla to five years in prison for the attempted coup,” said a statement released by the court.

According to the order for reference, Lieutenant Mohamed Ouattara and Sergeant Amara Sylla had hatched a military coup against the regime of President Ibrahim Boubacar Keïta.

The same document stated that, soldiers who testified at the trial had claimed during the investigation that Lieutenant Ouattara had approached them to attack the President’s home and to capture or kill him.

On Tuesday, the court has also sentenced two men to five years in jail for beating up Mali’s former interim president, Dioncounda Traore, during the occupation of his palace in May 2012 by protesters demanding his resignation.

The two men were convicted of charges including criminal conspiracy and attempted assassination.