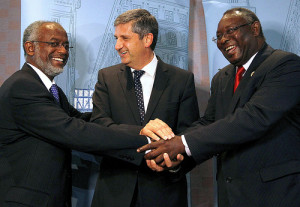 A three-day international conference under the theme “Sudan & Europe: Prospects of Cooperation for Regional Peace and Development” will come to an end on Friday in Vienna with a landmark achievement.  Sudan and South Sudan have pledged at the international economic forum to work together to develop their economies after their cooperation deals, but the Sudanese rebels criticized the meeting. In attendance from both countries are Ali Ahmed Karti, Sudan’s foreign minister, and Garang Diing Akuong, South Sudanese minister of commerce, industry and investment.
The event is seen as initiative that will bring the two countries closer to Europe. Minister karti highlighted that peace was important to both countries if they want sustainable development and thanked Austria for their kind gesture. He urged for the development of better diplomatic ties with Europe.
South Sudanese minister, Garang Akuong, also expressed similar sentiments at the conference citing that cooperation with its neighbor is important for the welfare of the two countries. Among the delegation was Elias Nyamlel Wako, South Sudan’s deputy minister for international cooperation who emphasized on the interdependence of both countries. He said that “without our economy improving, the economy of Sudan will not improve,” warning both sides to engage in a fruitful cooperation.
Despite such promising speeches, a released statement from the Sudan People’s Liberation Movement – North (SPLM-N), refereed to the tenure of the conference as “regrettable” and “shocking” because the Sudanese government continues to prevent humanitarian access to civilians in the rebel held areas and the violates human rights. The release urged “Austrians, in particular, and the European activists who believe in the cause of democracy and the respect of human rights to denounce this conference,” because it “has nothing to do with European democratic values.”