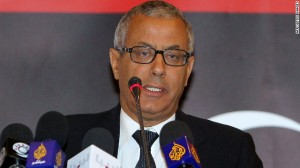 The former Libyan human rights advocate and diplomat, Ali Zeidan has been tapped by his country’s lawmakers as prime minister a week after the Parliament dismissed the previous picked PM Mustafa Abushagur whose controversial cabinet nominees raised protests and met tough resistance.
Mr. Zeidan, a moderate figure, was elected to the post after he got 93 of the 179 votes cast in the National assembly. He has now two weeks deadline to form a new government team, the first since the fall the Muammar Gadhafi autocratic regime after over 40 years in power.
Zeidan was educated in India and served as a Libyan diplomat from 1975 to 1982. Later on he stepped down from his diplomatic job and joined an opposition group dubbed the “National Front for the Salvation of Libya”. In 1989, he became the official spokesman of the Libyan League for Human Rights. And after the outbreak of the popular uprising against Gadhafi, he joined the rebels and served as envoy of the National Transitional Council to France.
The most pressing and challenging issues awaiting the upcoming Libyan government response include the probe in attack on the U.S. consulate in Benghazi that left four American diplomats dead, including U.S. Ambassador Christopher Stevens.
At the top of the agenda, there are also issues related to reconstruction, socioeconomic development and disarming the militias which continue to operate across Libya and commit abuses with impunity, fuelling insecurity and hindering the rebuilding of state institutions.
“A year ago Libyans risked their lives to demand justice. Today their hopes are being jeopardized by lawless armed militias who trample human rights with impunity. The only way to break with the entrenched practices of decades of abuse under Colonel al-Gaddafi’s authoritarian rule is to ensure that nobody is above the law and that investigations are carried out into such abuses”.
In its report on the threats posed by the Libyan armed militias, Amnesty International says “the only way to break with the entrenched practices of decades of abuse under Gadhafi’s authoritarian rule is to ensure that nobody is above the law”.
Experts say Libya has huge economic potentials but needs first to have security and stability to be able to gain the investors’ confidence and drain foreign capital to jump-start the economy.