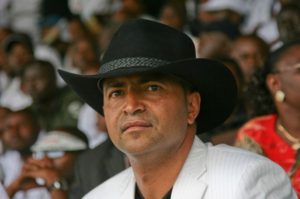 Moise Katumbi, the Democratic Republic of Congo’s opposition presidential candidate on Monday appeared before a prosecutor amid accusations from the government that he hired foreign mercenaries.

Katumbi was summoned to the prosecutor general’s office in the DRC’s second city, Lubumbashi, on May 9.

Key opponent of Kabila, Katumbi is tipped to become the next president if free, fair and timely elections are held. But allegations that the former governor of the mineral-rich Katanga Province hired mercenaries could stop his presidential bid dead in its tracks.

Katumbi, the owner of successful Congolese club TP Mazembe, declared last week that he would run for the presidential elections scheduled to take place in November. Katumbi was a former ally of current president Joseph Kabila and governed the mineral-rich Katanga province from 2007 until September 2015, when he left the ruling party after accusing Kabila of attempting to delay the 2016 elections.

Kabila is due to step down in November after two consecutive terms as president of DRC, one of Africa’s largest and mineral-rich countries but which has been blighted by conflict for decades. DRC’s electoral commission said in January that it would take at least 13 months to update voter lists, pushing the election back into 2017.