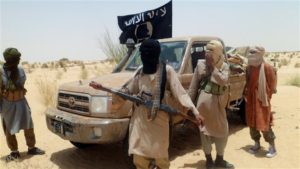 The terrorist leader was arrested on Thursday on the outskirts of the capital Bamako, Jeune Afrique said quoting Malian security forces. Toure is also believed to be providing logistical support to brother militants in Mali and neighbouring Burkina Faso, one military source on condition of anonymity told Jeune Afrique.

He is the second key element of the group to be arrested after Malian forces nabbed the head of the group Souleymane Keita, in March.

Toure, a Malian in his fourteens, is also known as a former member of a Kidal Islamist group. He encountered Souleymane Keita and Boubacar Sawadogo, the head of Ansar Eddine franchise in Burkina Faso, after 2010.

Malian military authorities believe that Toure provided logistical support to Sawadogo’s group during the October 15, 2015 attack against a military position at Samorogouan [around 30km near the Malian border] which resulted in the death of three gendarmes.

Ansar Eddine South has been blamed for the attacks against Malian localities of Fakola and Misseni as well as for some terror attacks on Bamako, Jeune Afrique says.