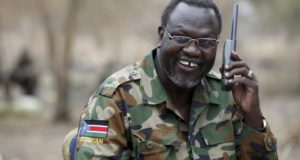 He made the statement during a meeting with the UN Special Envoy on Sexual Violence in Conflict, Zainab Bangura, who was visiting the country.

Bangura is on a four-day visit to the country to validate and launch the implementation plan of the joint communiqué that she co-signed with President Salva Kiir in October 2014.

“Now we are settling in and very soon, we will start this project and increase awareness among the army and the police and other security organs,” Machar said.

Since then, conflict-related sexual and gender-based violence has been widespread.

Over a five-month period last year, more than 1,300 rapes were reported in South Sudan’s Unity State – just one of the country’s 10, UN reported.

According to Amnesty International, cases of sexual slavery and incidents of gang rape of girls have been reported.