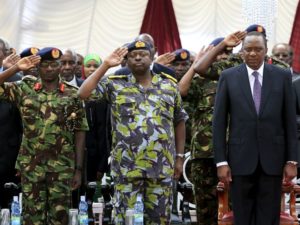 Kenya’s President Uhuru Kenyatta has warned that his country might withdraw its troops from Somalia if the international community does not plug funding gaps for the operation.

According to UN Security Council Report, an online bulletin by the Council, President Uhuru, last weekend, told envoys from the UN Security Council in Nairobi that African countries contributing forces to the AU mission in Somalia will not fill the funding gaps but will rather pull out because of the huge cost implications.

Much of the funding has been coming from the European Union. But in January, the EU cut its budget to the African Union Mission in Somalia (Amisom) by 20 percent.

“As one of Amisom’s major troop contributing countries, Kenya is questioning whether it was worth the huge cost” Uhuru said.

President Kenyatta reportedly raised the issue of accusations against Kenyan troops being involved in trafficking of charcoal and other goods in Somalia, saying that if people did not appreciate what they were doing, there was no reason for them to stay.

Kenya has 3,664 soldiers based in Sector 2 of Amisom, which is under the African Union, but is technically a UN controlled peacekeeping mission.

The majority of Kenyan forces are in lower and middle Juba region of Somalia.

A withdrawal of Kenyan soldiers would impact negatively the war against terrorism as Kenya’s Defense Forces (KDF) battle the terror group al-Shabaab.