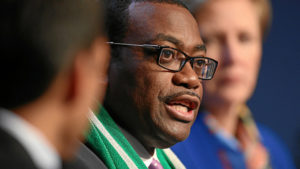 The president of the African Development Bank (AfDB) Akinwumi Adesina on Tuesday called for action to support African countries affected by drought and climate change announcing that the African fincial institution will lead the way and triple its climate finance to $5 billion per year by 2020.

He made the announcement in a speech at the opening ceremony of the 5-day AfDB Annual Meetings on energy and climate change held in Lusaka, Zambia.

According to Dr Adesina, Africa, which contributes less than 3% of the global greenhouse emissions, is suffering from the effects of El Nino, which has caused severe drought in fourteen countries with thirteen located in Eastern and Southern Africa.

Dr Adesina who took office in September last year demanded a “climate justice” for Africa, calling on the Green Climate Fund and the Global Environment Facility to “pay for the insurance premium of African countries to the Africa Risk Capacity Agency.”

This “will allow them to cope with extreme climate events … like Senegal which received $17 million pay out to mitigate the impacts of drought,” he said, announcing that AfDB will lead the way and triple its climate finance to $5 billion per year by 2020.

He also indicated that the Bank is providing financing of $549 million to support countries to deal with drought and reduce vulnerability.

He said the AfDB will invest $12 billion in the energy sector over the next five years to deliver on the New Deal on Energy for Africa – the Bank’s strategy.

“We expect to leverage $45-50 billion into the energy sector,” he added.