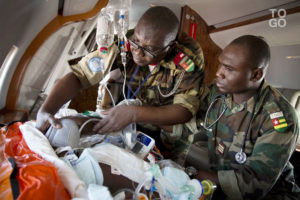 Five UN peacekeepers from Togo were killed in an ambush against a convoy of the UN Multidimensional Integrated Stabilization Mission in Mali (MINUSMA) on Sunday, the United Nations said.

The five soldiers’ convoy was attacked 30 kilometers west of Sevaré in the northern region of Kidal, the UN said.

UN Secretary General Ban Ki-moon condemned the attack, calling terrorism one of the most serious threats to internal peace and security in the country.

The Secretary General extended his heartfelt condolences to the families of the five peacekeepers and to the Government and people of Togo, and called for swift action to bring the perpetrators of the crime to justice.

“I most strongly condemn this abject crime which adds to other terrorist acts targeting our peacekeepers and which constitute crimes against humanity under international law,” said Mahamat Saleh Annadif.

No group has claimed responsibility for the attack.

With Sunday’s attack, at least 64 MINUSMA peacekeepers were killed while on active service. Another four died in friendly fire incidents, UN figures show.