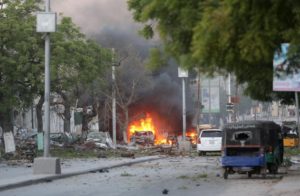 Gunmen have stormed a hotel in the center of the Somali capital Mogadishu on Wednesday evening, killing at least 2 MPs and 13 other people.

Al-Qaeda-affiliated al-Shabaab quickly claimed responsibility for the attacks – claiming to have killed 20 people.

Police Officer Major Ibrahim Hassan was quoted by Reuters as saying that “Lawmakers Mohamud Mohamed and Abdullahi Jamac died in the hotel.”

One of the three dead fighters drove the car that rammed the hotel while the others stormed the hotel, al Shabaab said.

The attack happened shortly before the arrival of Turkish President Recep Tayyip Erdogan in Mogadishu.

Al-Shabab, which is battling the UN-backed government, was driven from Mogadishu in 2011 but still remains a potent threat and frequently carries out attacks in the city.

The government, with the help of African Union forces, is fighting the al-Qaeda-linked group to regain control of the war-torn country.

Earlier on Wednesday, the government announced it had killed Mohamed Kuno, the al-Shabab militant who led the attack on Garissa University in Kenya in April 2015 that killed 148 people.